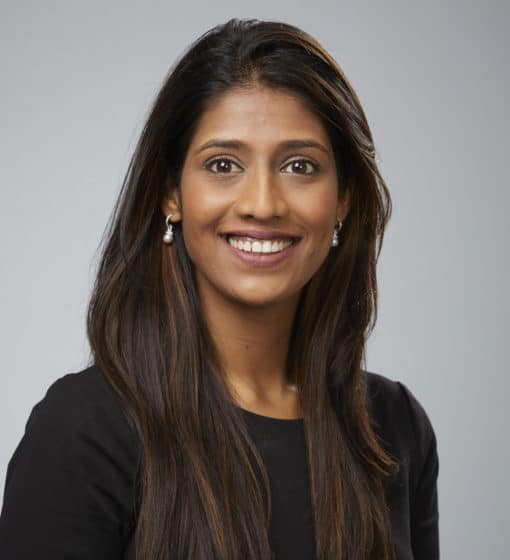 Anupama Reddy’s practice focuses primarily on antitrust class actions alleging anticompetitive conduct such as price-fixing and monopolization. She represents businesses and individuals in complex civil litigation throughout the country. In addition to her antitrust practice, she has represented whistleblowers in qui tam matters and False Claims Act litigation against companies that have committed fraud against the government. She approaches her practice with diversity of thought, enthusiasm, and diligence.

Anu’s professional qualifications are exemplified by her invaluable work on the Capacitors case and trial. Anu was heavily involved in pre-trial matters, including drafting pre-trial filings and arguing pre-trial motions. She had an active role in trial strategy, trial stagecraft, preparing and examining witnesses, and presenting evidence to the jury. Prior to trial, she drafted and argued dispositive motions in relation to summary judgment, attorney costs and fees, and opt-out matters.

In addition to her duties for the Firm, Anu volunteers for the Federal Pro Bono Project of the Bar Association of San Francisco. She currently represents a Plaintiff in a wrongful termination matter against a multinational corporation, in the Northern District of California.

Anu graduated from Berkeley Law with a specialization in intellectual property law. She was an associate editor of the Berkeley Technology Law Journal, and the promoter and social co-chair of the student-led organization, Women in Tech Law. At Symbiosis Law School in India, Anu was awarded the American jurisprudence equivalent award for the Law of Evidence.

Prior to joining the Firm, Anu was a Law Clerk in the Antitrust Section of the California Department of Justice, Office of the Attorney General (San Francisco), where she reviewed documents, conducted legal research, and drafted memoranda for investigations and litigation involving pharmaceutical and oil and gas companies. In Mumbai, India, she was Legal Counsel for Cipla Limited, where she specialized in contracts and mergers and acquisitions.

Anupama Reddy is a member of the American Bar Association and the Bar Association of San Francisco. She currently serves on the California Lawyers Association’s Antitrust & UCL Publications Committee.